Compare and contrast 2 images found in the media or from photographic history where the production of identity is evident. In particular try to find images where the issue of race, gender or class are pronounced. 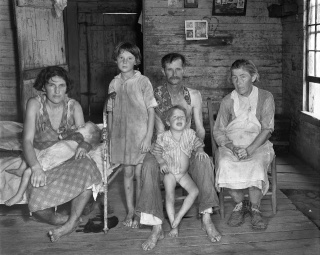 The first image I choose was taken by photographer Walker Evans , Evans is an American photojournalist. He is widely recognised for his depression era work where he followed 3 families in the 1930s and documented their lives after the great depression. He used a large format 8×10 inch camera. Figure 1 shows a family of 5 sitting round quite an empty room, neither of the subjects look content and look unkempt, the identity of this family is portrayed as them being under privileged and of a lower class. Due to the historical context of this image being taken to show the results of the great depression viewers already have that knowledge when analysing the photo and have a presumption this is a poor family that have been effected by the economy. One element in this photo that represents the lower class identity of this family is their clothes, although the photograph is black and white you can see their clothes are dirty and not kept well also that they aren’t wearing any shoes then further emphasis them being under privileged. The body language of the family shows them slumped with them not being bold and straight it also creates a feeling they’re not confident in themselves relating again to the issue of class.

The second photograph I choose was taken by Yousuf Karsh of Winston Churchill, I feel the atmosphere in this image is a lot more dynamic and bold compared to the first image this is as they’re both presenting different concepts. Evans photo brings attention to the social division in classes and the effects of poverty after the great depression whereas Karsh’s photo is a strong portrait of someone well known in the public eye.

Churchill was known for being a strong leader and character; I feel this identity is evident through this portrait as the contrast of the black and white is dynamic which creates an overall bold atmosphere. His body language of standing straight with his hand on his hip and stern facial expression is also very influential to building his identity. The difference in classes is very noticeable between these two images, both of these images were near the same eras as each other but the clothing and styling of the people brings attention the differences between classes, Churchill wears formal neat suits creating a more reinforced character In comparison to ragged dirty clothes. And even though both images are taken in black and white the image by Evans is less contrasted creating an atmosphere of dullness and sadness where as the more contrasted sharper photo by Karsh creates a more high powered and an overall stronger image.