After experimenting with destroying negatives and creating photograms etc, I wanted my images to look dreamlike and surreal. This made me think about how dreams are created and how memories come together from the subconscious to create a story when asleep.

Dreams are a succession of images, ideas, emotions and sensations that usually occurs involuntarily in the mind. They can be seen as a connection to the unconscious mind, can range from normal and ordinary to surreal and bizarre.

Sigmund Freud developed the discipline of psychoanalysis; He explained dreams as manifestations of ones deepest desires and anxieties, often relating to repressed childhood memories or obsessions. Carl Jung rejected many of Freud’s theories. He came to believe that dreams present the dreamer with revelations that can uncover and help to resolve emotional or religious problems and fears.

Most people today appear to endorse the Freudian theory of dreams, that dreams reveal insight into hidden desires and emotions. Other theories include those suggesting that desires assist in memory formation.

A dream is something you are aware of at some level. This can be fragmentary, disconnected and illogical. It’s said that failing to remember a dream later on when you’re awake doesn’t mean you weren’t aware of it when it occurred. It can just mean the experience was never really carved into your memory, has decayed in storage.

Dreams contain disconnected memory fragments; places we’ve been before, faces we’ve seen, situations that are partly familiar. This is a key aspect in the imagery in my work. I want to build up a collection of images that are seen as memory fragments. It would work well if I make the project quite personal to me, showing images from childhood and places I’ve been. I can almost keep a photographic diary then apply the destruction of the colour negatives to make them look for surreal.

These fragments in dreams can either be pasted together in a semi random mess or organised in a structured and realistic way. Dreams occur in all stages of sleep, but they seem to become increasingly fragmented as the night progresses, they appear to be constructed out of mishmash of prior experience.

Everything we see, imagine or think about is linked with neutral responses somewhere in the brain. Neural activity in the primary sensory areas of the neocortex produces the impression of sensory perception. This means that neurons firing in the primary auditory area create the illusion of hearing things.

They can play a role in memory incorporation and influence our long-term moods, physiology and creativity. The hippocampus can keep track of such connections and can form appropriate links between memories.

Most dreams incorporate fragments of experiences from our waking lives. It’s common to dream about disconnected snippets like a particular person, place or activity. You can have memories called ‘episodic’ which represents whole episodes instead of just fragments. However most of our dreams just recombine fragments of waking life. These fragments are relatively familiar and reflect the interests and concerns of the dreamer.

Dreams can not only replay memory fragments but also create brand new highly creative mixtures of memory and knowledge.

Some researchers have capitalised upon dream reports to gain insight into the process by which memories are immediately incorporated. Freud famously referred to this as ‘ day-residues’. It’s very common for memories to be incorporated into dreams on the first night after they were initially experienced.

The aesthetically element of the destroyed images I feel ties in with the idea of how fragments of old memories and new combine to create dreams.Dreams are almost been as destroyed memories that emerge from the subconscious. The colours and destruction on the images previously already look like a dream sequence. 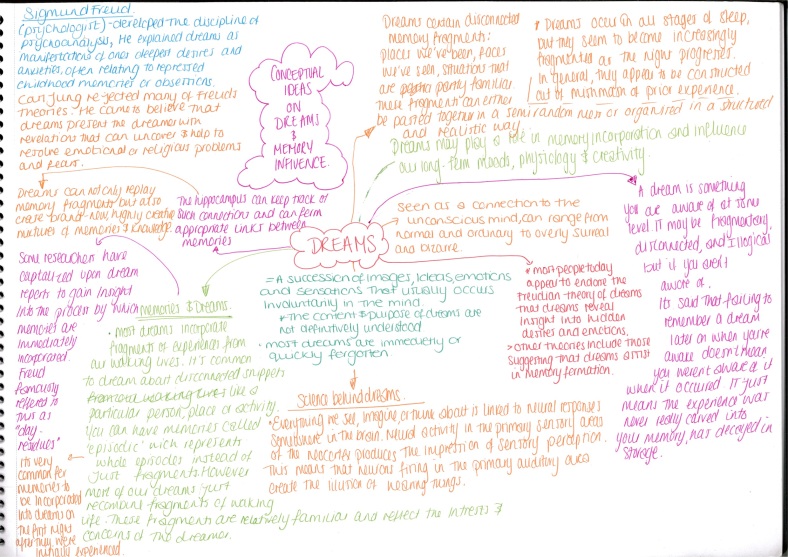