Liam bailey is a London based commercial photographer, he has appeared in many magazines including the independent, guardian and conde nast traveller. After his post graduate studies Liam went travelling round the world it was then he said photography became a necessity. Bailey went to the world clown convention in bogner then took his clown photos to the British journal of photography who then gave him spreads in the magazine. His photographic career has been framed by the shift from analogue to digital image making with people and personalities being his focus of interest.

Baileys book ‘forever England’ photographs the small Bakonscot model village taking images of the miniatures, close up, to look like portraits. It was initially built by a London accountant to entertain his houseguests and then opened to the public in 1929 being the oldest miniature village in the world. Bailey creates a rich and powerful sense of character and atmosphere presenting an image of England rooted in an old 1930s time zone. This included 3000 people and 300 animals.

The characters seem frozen in a moment from a very real seeming and subtle scenario, its this emotive quality that prompted Bailey to document the lives of Bekonscots inhabitants.

Bailey created a series of images of these figures that although were un staged were approached in the manner of portraits. Where Bailey takes such close images it hides the actual size and creates an illusion to how big they are-we’re made to share their scale. Bailey sees the work as a ‘social documentary’ creating convincing portraits of the life of a particular community.

Baileys images stay close to their subjects, although he could see the sadness in some of the model village scenes he said in an interview he was surprised at how unsettling some of the images can be. In places the characters fixed roles begin to look less cosy and more like a burden like the man running from a ball or the fairground performer on the knife throwers wheel.

What I like the most about Baileys work is that although he is taking them close up to look like real portraits similarly to how you would with people he isn’t hiding or trying to manipulate them to look real,you know the models are fake but they are still relatable as they’re positioned in real life situations making the environment familiar. Also where they’re close ups of figurines the light shines of the clay which I think makes the images look sharper and more detailed this also makes the bright colours like the blues and reds more emphasised creating a warm overall feeling on the photograph. 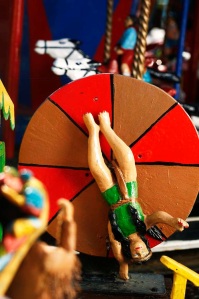 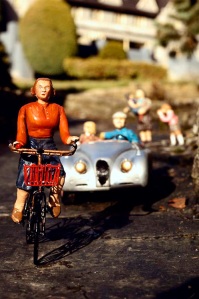